Having issues uploading videos on Youtube, hence the reason my Fujifilm review video is not part of this blog. It was supposed to be here, and showing how the video function works, but allas that is going to have to wait another day. So kinda irked abouth that.

Also thanks to the marvelous Jon at Tehkseven (http://www.youtube.com/user/tehkseven ) who, in one of his Phonage vids (sooo good check ’em out) talked a little about novelty cushions. Now this sounds incredibly boring, until you see them. 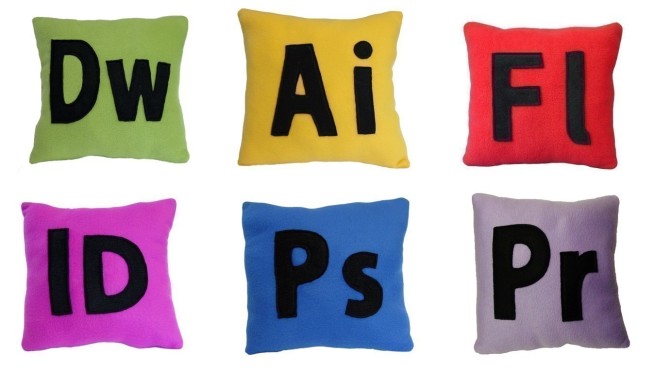 I mean how cool are these. I’m sure I was not the only person who got EXTREMELY excited over them 😛

Okay, maybe I was, but I am geek. I get away with all sorts. The pillows cost $16.99 (£11) each and are from the lovely peoples at CraftSquatch, who speciallise is making geeky pillows. They also are selling Social Networking pillows as well, starring the Myspace logo, facebook, etc.  If you are like me, and decide that you MUST HAVE these, then visit their store at http://www.etsy.com/shop/Craftsquatch

Also a news story, which has a rather large importance to me, and many other web developers, is the wonderful Steve Jobs and his anti-Adobe stance. Where the issue stems from is that when Apple released the new iPad, it became apparent that there was going to be NO Flash. For the unitiated, Flash is the software used for videos, games and many other features of your favourite websites. *very simplified analysis of the situation* I have heard people say that this will be the ‘end for Adobe Flash’.  Which I am hoping  is a slight exaggeration, I mean I am just getting to grips with working on Flash. I am hoping that Apple and Mr Jobs, backtrack and do start using Flash again, buuuutt I seriously doubt it. I mean days before Adobe CS5 launched, Mr Jobs issued a statement saying that there was no way that Apple were going to backtrack on the Flash issue.  For more info visit http://techcrunch.com/2010/04/08/adobe-flash-apple-sdk/

It sounds like neither side will give.  Adobe should take a leaf out of Apple’s book, and just sue them. I mean Apple is sueing just about every smartphone producer for infringing on patents, so why not.  As a developer, I do have to side with Adobe. Sorry Apple, I was becoming a wee fan, but you are acting like a spoilt child.  So Team Adobe FTW.

Hopefully this stress test for the worlds web developers, will come to an end soon. *crosses fingers*

See ya on the flipside *aka- tomorrow*

Ok, now one of the main things I need to edit my paintings and drawings i have done is photoshop. And my Adobe CS3 has ‘fatal errored’ over the last two days, leading to me deinstalling the whole thing.

I dont have a working copy at home. So I thought I could install the CS4 trial untill I could get CS3 back. But the stupid thing is refusing to install.

So before I had a dead CS3, and now i have an uninstallable cs4. And the Adobe website is useless in giving any support. The tool they give, can’t even detect the photoshop files I’m having an issue with. So good help there, Adobe. Pat on the back for you.

I am giving it a break, I’m deleting it all and starting from square one tomorrow. Despite me whining a lot, this blog is to say that I am not gonna be uploading much in the next while (unless someone can give me my beloved cs3 back).

I may photograph my sketchbook, and paintings and the like. I have like 3 commissions that i cannot do, I am sending them photos of sketches and stuff, and its going ok so far. But I can’t do anything digitally.