Glasgow is my favourite City in the world. Some may say it’s because on a worldwide scale, I have no visited very many cities. But I’ll just dismiss that with a wave of my hand. I need to explain a little, or I feel I should. I spent a lot of time in Glasgow, about 8 years ago, when I was studying to be a Veterinary Nurse (something I failed due to my ability to flunk exams). But I stayed in Glasgow for a total of about 6 months out of the year, and I fell in love with the place. It is one of the few places I get really excited about visiting because it holds so many memories for me, and it is one of my dreams to move there.

Glasgow is a really warm city, and it feels really homely, well it does to me anyway. The people are so friendly and it just feels a buzz to be there. Like any city, it is seeing its fairshare of run-down areas, but there is movement in the right direction, with people trying to improve appearance. There are a few areas in the city centre, where there graffiti projects, which aims to make things that little bit brighter. 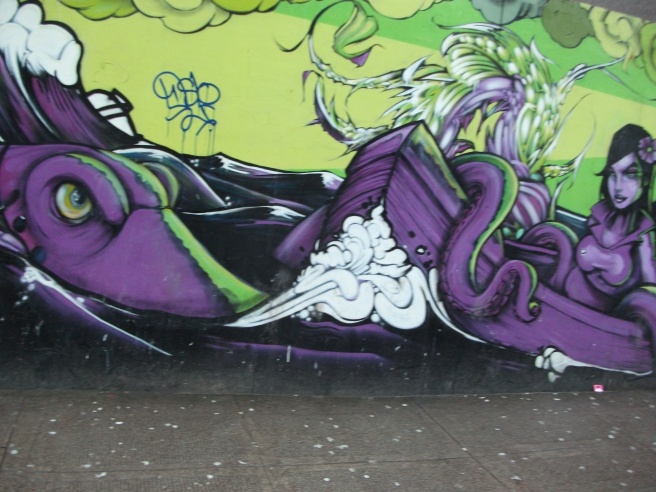 But, of course, the reason I was at Glasgow was for Good Charlotte. Who I swear have the world’s most obsessed fans. When it started rain/hailing, it was only GC fans in the queue outside. Yes, I was there at 10am, when the venue opened at 6.30pm. All to make sure I got to the front. It was so worth it. The Wonder Years, Framing Hanley and Four Year Strong,  all played for half an hour each, whilst GC played for an hour and 20 minutes. And GC’s set seemed to go really, really fast. Was so awesome though, so worth all the waiting and everything.

That picture of Benji from Good Charlotte. It is really out of focus after being told to switch the flash in my camera off, but I like it. It could be the subject matter *cough* or it could be it does look quite cool. Or to me it does anyway.